The use of drones in mining has taken off in recent years. Companies have long understood the potential of these devices in the mines for many applications. In fact, mining operators across North America, Africa, Australia, and France have used drones in some capacity since 2014.

Now, modern technology takes these capabilities even further. Many mines across the world benefit from drone operators across their land and quarries. More will soon see the potential of underground drones in tunnels.

What roles allow these drones to become such an essential part of mining these days?

The drone allows mining companies to see their land and materials from a whole new perspective. This bird’s eye view offers a new field of vision on the landscape to better understand the impact of the mine. Users can see the relationship of new mining operations and stockpiles in the broader landscape. This, in turn, provides a better understanding of environmental implications of the company.

Then there is the ability to monitor stockpiles of materials and determine quantities. This used to rely on manual labor and working hours to get the best results. Workers had to determine the size and amounts of vast areas of materials. Today, aerial drones with lasers and mapping technology can calculate areas and volumes with ease.

There is also the ability to explore further in a given landscape and survey for new opportunities. Drones can scan vast areas that are perhaps difficult to traverse, or completely off-limits.

They can determine future investments and the next director of the company. The bonus here is the speed of data uploads and the quality of that data. These journeys into difficult areas also mean that mines can check out unsafe area, or reports of damage, in an efficient manner.

Why Drones in Mining, Rather Than People?

One concern with any increased use of drones is the impact that this will have on the job and human labor. Nobody wants a decrease in jobs and opportunities within the industry. However, there are times when it makes more sense to fly a drone than send in human surveyors.

The quality of the data continues the point above about cloud access and data sharing. Drones allow for larger quantities of data to automatically uploads to the cloud. It doesn’t take long for a team to enjoy processed, good 3-D models or other reports.

Previously, there was a long chain of information. Workers would gather data manually over long periods, write reports and send the data to the appropriate people. Those experts and site leaders could then pass on reports to those higher up, such as stakeholders.

Drones compile data with greater speed and efficiency. The maps and stats upload to the cloud, where anyone can access them as required. 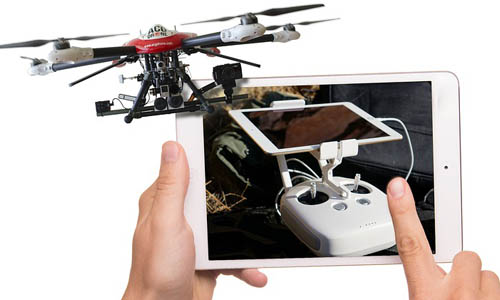 This speeds up the process significantly. But, this is not the only way that these drones aid time management within the mines. It takes a long time to send a manual survey team out into a mining area. Not only is their the time spent walking the site and taking notes, but there is also the travel and prep time. How long does it take to get the whole team kitted out in safety gear and onto the site?

Some companies employing manual surveying teams estimate it takes around a week to cover an area. The drone can fly out and back at great speed with minimal fuss. The best models can cover the same area in a matter of hours. This could mean significant improvements in timescales and productivity.

On the subject of getting the men kitted out, there is a safety element to this work as well. Mines are dangerous places. The landscape, open cast mines, underground shafts and stockpiles all pose a risk. Workers face injury in inhospitable areas. Unsafe ground and loose rocks are a problem. Surveyors easily fall and lose their footing. Then there are are other risks to health in hotter climates. It is much easier and safer to send in the drones.

Then there is the benefit of lower costs. The right drone isn’t cheap. It is an excellent investment for those that use it effectively. This cost efficiency works in different ways. The first is the simple fact that mines save on labor costs. All those men- hours with manual surveying get quite expensive. This is nothing compared to hiring a drone for a day.

Then, those that speed up production and data collection can benefit from more drilling and investment. There is also the decreased risk of compensation to workers injured in unsafe environments. This all comes together for an improved financial forecast. In fact, one Queensland company claims to save around $5 million annually.

Ongoing development in drone tech means improved opportunities for all of the benefits and roles mentioned above.

Some people may wonder why mining companies don’t turn to planes for imaging and surveying. This was the case for a long time. There was a point where this was the most convenient, faster way to create these images and maps. Drones make aerial photogrammetry seem obsolete.

A good drone will cover the landscape in a short amount of time, but fly long enough to get the data in one outing. It will also include the following:

The Best Drones In Mining Are Reliable And Easy To Fly

Some drones are better built for this job than others. There is no way that a basic, commercial quadcopter will manage the task. Mines need to hire operators with strong, high-end equipment. These drones need to be able to fly for long periods of time, potentially in changeable weather. This means a sturdy machine with a good balance and long battery life. The better the battery, the further the drone can travel. The further a drone can travel on one charged battery, the fewer trips that users need.

Another consideration with the best mining drones is the charge time. Some drones fly for an extended period but then take an hour to charge. This could mean wasted time, especially on days when the conditions are just right. An alternative is to choose a drone with a replaceable battery. This allows users to charge the dead battery while flying the same drone with the spare rechargeable battery.

This also means that the drone must be user-friendly with great controls. These long flights over vast areas could take the drone out of the line of sight. Here FPV systems (first-person viewpoint) can help to ensure the best results.

Operators see the area and stockpiles through the camera of the drone, via a screen. This allows them to change direction or investigate issues as they emerge. A good controller also means steady flight and improved channels.

The Drones In Mining Are Able To Offer Great Data

The benefits highlighted above mention the importance of simple data collection and sharing. This isn’t possible without the right technology within the drone. It needs to be smart enough to send data to the cloud. At the same time, it needs enough memory onboard to handle plenty of maps and images from a single flight. An SD card slot should do the trick there.

Of course, none of this data is possible without a good camera and laser system on board. Effective surveying, mapping and quantity analysis rely on clear images and precise mapping tech. This means a high-end camera and laser system. There are lots of camera drones with great potential for image generation. This increases with the right gimbal for panning and adjusting the angle.

A great example of a company that leads the way with drones in mining in Africa is Rocketmine.

The French company Delta Drone created a subsidiary called Rocketmine that focuses on mining in South Africa and Ghana. In fact, there is the first licensed corporate drone supplier to operate in South Africa and Ghana. Their drones help miners to improve the work of the mine, with the benefits mentioned above. This means an efficient and safe way to work – with improved costs too.

This all starts with the pre-blast inspection. The visual tech on-board scans the area to make sure that no worker is within a one-kilometer radius. This increases safety around the blast site. The drone then records a live video of the blast for later analysis.

Experts can review the images from different angles and speeds to make improvements for further operations. The images and data recorded also allow for fragmentation analysis. This means that engineers better understand the finer details of the blast. The drone then scans the area around the blast for undetonated charges. Again this is a safety precaution for the men that will follow the drone into the site at a later date.

What About Underground Drones For Mining?

The applications with Rocketmine and the other advantages highlighted, all focus on work carried out above ground. This is where drones for surveying intersect with mining for that safer, quicker approach to data generation. However, this doesn’t consider all those mining applications below ground. There are even more areas below the surface that are difficult, and perhaps unsafe for human surveyors.

Old mine shafts and new tunnels offer the potential for both risk and reward. It, therefore, helps if miners can send a machine at first. Unmanned devices can search for a route in the dark, narrow tunnels and map new areas. They do so without risking the lives of workers and can provide clear data on what they find. Companies can then share these maps with workers and other investors to discuss progression.

One Swedish company is taking this to new depths – rather than heights – with a clever new drone.

Inkonova is a Swedish company working on a new type of drone for underground projects. This is more of an all-terrain vehicle than a straightforward drone. The precise laser tech and a combination of strong treads and rotors mean that it can roll, fly and climb. This is perfect for all those tight spaces and deep drops in new areas of the mining site. This is all possible thanks to their SLAM algorithm. This laser mapping creates detailed images or large spaces in a short amount of time. A test run in Mali led to a 3D image of a 30,000 cubic meter space of underground tunnel in just 10 minutes.

The Future of Mining is Brighter When Companies Bring in Drones

There is no doubt that drones are the best tools for the future of mining. This is the case whether drone operators turn to open cast mining or underground mining. Work in Africa, Australia, and the US shows that there is more than just high potential in open cast mining. Companies have already used drones with great success in multiple roles. These efforts cut costs, reduced working hours and improved safety. Few would think about operating without them now that they have the results to prove their worth.

The use of drones in underground mining just emphasizes this idea of an industry on the move. Drones easily proved their worth with aerial mapping and imaging on the surface. This new tech with underground drones and laser systems takes this even further. Any mine that wants improves profits reduce accidents and shorten timescales should consider a drone.

This site uses Akismet to reduce spam. Learn how your comment data is processed.